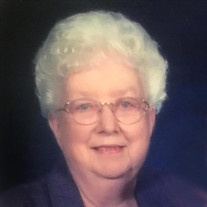 Wilma O. Reiners, 93, of Gibson City peacefully passed away Sunday September 20, 2020 with her loving children at her side. Visitation will be held 5:00-7:00 pm Thursday September 24, 2020 at Rosenbaum Funeral Home in Gibson City. Funeral services will be held at 11:00 am Friday September 25, 2020 at the funeral home with Pastor Gary Fairchild officiating. Burial will be at Drummer Township Cemetery in Gibson City. Memorial tributes may be made to The Gibson City United Methodist Church, Gibson Area Hospital or to Carle Hospice.
Wilma was born August 13, 1927 in Gibson City a daughter of Walter and Mary Blanche Swearingen Jordan. She married Raymond Reiners on September 14, 1947 in Gibson City. He passed away October 18, 2003 they were married fifty-six years. She is survived by her five children - Gary (Ruth) Reiners of Elliott, Gail (Vicki) Reiners of Gibson City, Wanda (Ron) Baird of Gibson City, Cindy (Terry) Bell of Gibson City and Greg (Rebecca) Reiners of Gibson City. Eleven special grandchildren Gretchen (David) Greenholt, Heidi (Tim Boehme) VanWinkle, Jennifer (Jeff) Foster, Michael (Tara McDonald) Reiners, Lori Clinton, Brad (Rachael) Baird, Matt (Hannah) Bell, Staci (Mark) Ward, Jenny Stahl, Adam Stahl and Andrew Reiners and nineteen precious great grandchildren. She was preceded in death by three sisters and one brother.
Wilma was a faithful and dedicated member of the Gibson City United Methodist Church. She enjoyed cooking, baking, playing cards, crocheting afghans for three generations and cherished family dinners and get togethers. She was the happiest when she was spending time with her family, they brought her much happiness and she was proud of each of them. She will be greatly missed and forever loved.


To send flowers to the family or plant a tree in memory of Wilma O. Reiners, please visit our floral store.

Please click here to view the video tribute
To send flowers to the family in memory of Wilma Reiners, please visit our flower store.