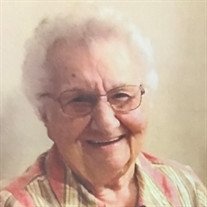 Wilma Jean Metz Freehill was born December 6, 1928, daughter of Lewis and Amy Hazelton Metz. She was born in a farmhouse north west of Forrest IL. She attended a country school a mile north of Forrest through 3rd grade. After moving a mile west of Strawn, she went to and graduated from Strawn School in 1946 with 7 classmates. She worked 2 years at Honegger's Hatchery, south of Forrest. Wilma dated Joe Freehill for 5.5 years, including 1.5 years while Joe served in the Army, including 6 months in Germany during WW ll. She married Joe on 1/8/49 at St. Rose Church, Strawn. When Joe's family moved to CA, they lived with sons Jerry & Dennis for 2 years on the Freehill family farm southeast of Strawn. In 1953, they moved to Strawn. In 1954, Joe and Wilma bought the home in Strawn where they raised their family & lived until Wilma moved in 2016.
Wilma is survived by her children Jerry (Sandy) Freehill, Terri (Stanley) Davis, Judy (Delbert) Tjarks, & Todd (Missy) Freehill. She loved her grandchildren Katrina Freehill, Steve Shaw, Mike Davis, Jeremy (Katie) Davis, Eric (Jessica) Tjarks, Amy (Guy) Cook, Whitney Freehill, Tianna Freehill, and Bryson (Ariel) Freehill. She treasured visits from great grandchildren Emalie and Maxwell Freehill, Sophia and Jackson Davis, Chloe Tjarks, Waylon Freehill, and Maisy Freehill. Wilma is survived by 2 brothers, Charles Metz & Donald Metz, sister-in¬-law Shirley Metz, many nieces and nephews, and close friends the Tom & Aldene Lynch family and Becky Freehill.

She was preceded in death by husband Joe, who died 8/25/07 while walking his dog in his yard. Son Douglas was stillborn 11/3/58. Son Dennis passed away on 3/11/98 from a heart attack. Granddaughter Karleigh Freehill and Grandson Colson Freehill passed away in 2020. Her parents and brother Elwyne are deceased. She lost her best friend, her dog Maggie.

Wilma was a 50 year member of the St. Rose Altar and Rosary Society and 50 year member of the Crazy Bridge Club. Her kids all remember having to go up to their bedrooms when Mom hosted Card Club, but the leftover goodies made it worth it. She & Joe were caretakers for Strawn Cemetery for many years. She cared for 5 elderly women in Strawn and was a nursing aide for 12 years. Wilma's enjoyments in life included traveling with Joe, family, and friends, playing cards, & going with Joe to the Bellflower Opry.

A public visitation will be Monday 1/4/21 from 10 a.m. to noon at Rosenbaum Funeral Home, Gibson City. Mask is required. A private Mass will follow at Our Lady of Lourdes Catholic Church in Gibson City with Fr. Dong van Bui officiating. A private burial will follow immediately after Mass at Strawn Cemetery.

In lieu of flowers, memorials can be made to Shriner's Hospital for Children or the Activity Fund for Gibson City Villas of Hollybrook. Wilma, always very social, participated regularly in the activities there, providing friendship & enjoyment.

The family wishes to give a big thank you to everyone at the Gibson City Villas of Hollybrook. They helped Wilma have 4 years of quality life after leaving her home in Strawn. They helped Wilma have a beautiful 92nd birthday with her loved ones during this pandemic. In Wilma's final days, they supported the family in making it possible for Wilma to pass in her apartment, as she wished.

To send flowers to the family or plant a tree in memory of Wilma Freehill, please visit our floral store.

To send flowers to the family in memory of Wilma Freehill, please visit our flower store.