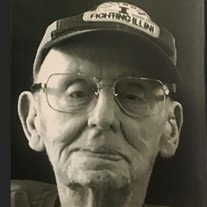 Wayne E. Tyler of Savoy, Illinois, formerly of Loda, passed away on August 19, 2019 at Carle Hospital in Urbana. A celebration of life will be at 11 a.m. on Tuesday, September 3 at Rosenbaum Funeral Home, 925 North, IL-47 in Gibson City with Pastor Jim Davis officiating. Burial will be in Drummer Township Cemetery in Gibson City. Visitation from 10 to 11 a.m. on September 3 at the funeral home.
He was born November 5, 1927 in Wing, Illinois, the son of Fred and Belle Marie Tyler. He married Ila Friese on May 21, 1950. She passed away on January 22, 1988. He later married Wilma Rick on June 15, 1996, and she passed away November 21, 2013.
Survivors include a brother, Fred (Debbye) Tyler, of Countryside, Illinois, his daughter, Lynn Eddleman (Tom) of Champaign, Illinois, grandsons Dwight Eddleman (Nikki) of Monticello, Illinois, Tommy Eddleman of Tuscola, Illinois, Scott Hoffman of Las Vegas, Nevada, stepchildren, Maren Brucker (Don) of Mahomet, Illinois, Martha Warsaw (Darwin) of Farmer City, Illinois, Lynn Hubbard (Jim) of Apache Junction, Arizona, Cindy Smith (Joe Locsin) of Lake Forrest, Illinois, William Rick, Jr. (Kathy) of Farmer City, Illinois, Timothy Rick (Mindy) of Farmer City, Illinois, and many step-grandchildren and great-step-grandchildren. He was preceded in death by his parents, both wives, his daughter, Lorraine Hoffman, and sister, Marjorie Ernest Morris.
He was a first class fireman in the United States Navy during World War II and then served in the reserves for seven years. He worked as a carpenter for many years and in 1951 began his career at the Gibson City Post Office as a substitute carrier, then becoming a regular carrier and advancing to a regular clerk. In 1967 he was named an Assistant Postmaster, and in September of 1973 become Postmaster until his early retirement at age 50 in January 1983.
He was a Boy Scout leader for many years, a member of the American Lutheran Church in Gibson City and was once very active in his church, as well as assisting in some of the construction of the church in 1963. He and his wife, Ila, purchased a lot and later a lake home at Bayles Lake, Loda, Illinois, and after retirement moved there. He took up golf and golfed many courses in the area. He volunteered in the recycling program at Bayles lake, took on many construction projects (decks, etc) for Bayles Lake residents, and added on a beautiful family room and deck on his own residence. He enjoyed spending time with his loved ones, pontoon boat rides, feeding the birds, attending and watching Illini football and basketball games, loved Chief Illiniwek, and collected Native American figurines and plates.
In lieu of flowers, memorials may be made to American Cancer Society.

To send flowers to the family or plant a tree in memory of Wayne Tyler, please visit our floral store.

To send flowers to the family in memory of Wayne Tyler, please visit our flower store.