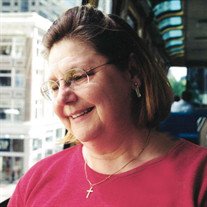 Chaumont, New York - Sharon "Kay" Adams, 71, of Chaumont, New York, ended her brave battle with cancer at home on Saturday, September 29, 2018 surrounded by her dear family and friends.
Visitation will be from 4-7:00 p.m. Tuesday, on October 2, 2018 at Reed & Benoit Funeral Home in Watertown, New York. A graveside service will be at 12:00 p.m. on Friday, October 5, 2018 at Drummer Township Cemetery in Gibson City, Illinois. Rosenbaum Funeral Home in Gibson City is assisting the family with arrangements.
Kay was born on November 8, 1946 at Paxton, Illinois a daughter to Francis and Bernadine Collins Adams.
She leaves behind her three children; Aaron ( Ashley ) Goodrich, Evansville, Indiana, Angelia "Angie" (Steven) Phillips, Ardmore, Oklahoma, and Jason (Arnie) Pulido, Daly City, California. She created special memories for all of her kids, from her terrible cooking to her tremendous love of Christmas.
She also leaves siblings; Linda (Bill) Gandy, Sibley, Illinois, John W. (Kirsten) Anderson, Watertown, New York, and Richard (Lisa) Anderson, Dexter, New York, sister in-law, Emily (Steven) Massey, Coweta, Oklahoma as well as many grandchildren, great grandchildren, nephews and nieces, and cousins.
Kay was preceded in death by her parents, grandparents, brothers, David Adams and Delmar Anderson, and grandson, Michael Phillips.
Everywhere Kay lived she left many memorable friends who remained her friends all her life. She spent the most time in Vacaville, California, making a new start for her young family and setting the example for a strong single mother in the 1970's. There, she remarried and created a home full of love and coziness, being most proud of her fruit orchard and rose garden.
One of Kay's favorite jobs that she spoke of often was her time as a Domestic Missionary Outreach at World Vision in Federal Way, Washington. She considered herself blessed to have been employed there while the founder, Robert Pierce, was still active. She greatly enjoyed the times he would walk around, stop, and visit with the employees, who he considered the backbone of the company. She made many friends while on the phone telling them about the work of this special nonprofit Christian organization.
She was an active member of the Emmanuel Congregational Church of Watertown, New York, having served as a Deacon with her dog, Linus for many years.
Kay had many passions in her life, from her special wink to all her nieces and nephews, Dr. Pepper, and indulging in her her insane amount of watching QVC.
The family wishes to thank all friends and family that assisted in her care during the past year. A special thank you to Deonna McCollom and Carol Dadona for their dear friendship and wonderful care along with immense gratitude and appreciation for the staff of Jefferson County Hospice.
Kay listened to a different drummer, her theme song was, "I did it my way". All who really knew her, knew this.

To send flowers to the family or plant a tree in memory of Sharon "Kay" Adams, please visit our floral store.

To send flowers to the family in memory of Sharon Adams, please visit our flower store.