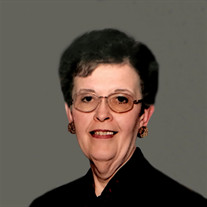 Sandra S. Reynolds, 77, of Gibson City passed away on Monday, August 12, 2019 at Gibson Area Hospital.
Her Celebration of Life Service will be held at 3:00 p.m. on Saturday August 31, 2019 at Rosenbaum Funeral Home in Gibson City with Pastor John Tennyson officiating. Visitation will be held 1:00-3:00 p.m. on Saturday prior to her service at the funeral home. Memorial contributions may be made to Gibson Area Hospital Auxiliary or Gibson City United Methodist Church.
Sandra was born on March 14, 1942 in Colfax, Illinois a daughter of Dale and Jean Munster Graham. She married Marvin A. Reynolds on June 30, 1963 in Colfax, they were married for 42 years. He preceded her in death on June 23, 2005.
Surviving is her sister-in law, Eve Steinberg of Gibson City; niece, Heidi (Mike) Ross of Salem, MO; nephew, Chad (Faith) Steinberg of Rantoul; great niece, Libby; great nephews, Hunter and Devon; and numerous other nieces, nephews, great nieces and nephews, cousins and a host of friends.
She was preceded in death by her parents.
Sandra worked at Country Companies in Bloomington, Illinois. She later worked at M & W Gear Company in Gibson City for 25 years. Sandra and her husband owned and operated Will-E-Makit Antiques in Gibson City.
She was an active member of Gibson City Chamber of Commerce and the Gibson Area Hospital Auxiliary. Sandra enjoyed having supper once a month with her High School classmates from Octavia High School.
Sandra never met a stranger, she had a smile for everyone. She was a loving aunt and friend and will be truly missed.

To send flowers to the family or plant a tree in memory of Sandra S Reynolds, please visit our floral store.

Please click here to view the video tribute
To send flowers to the family in memory of Sandra Reynolds, please visit our flower store.