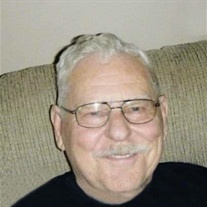 Foosland-
Sammy Ray "Sam" Sommer, 82, of Foosland, passed away at 9:25 pm on Wednesday, November 28, 2018 at Gibson Area Hospital in Gibson City.
His Celebration of Life service will be held at 6:00 pm on Tuesday, December 18, 2018 at Rosenbaum Funeral Home in Gibson City with The Rev. Gary Fairchild officiating. A Masonic service will be held at 4:00 pm prior to the start of visitation at 4:30 until time of the service.
Sam was born on April 3, 1936 in Bloomington, a son of Samuel and Mary (Roberts) Sommer. He married Shelby Lois Dean on January 15, 1956 in Foosland.
Surviving is his loving wife of 62 years, Shelby Sommer of Foosland; children, Kim (David) Rueck of Foosland, Christy Lazzell of Savoy and Tim Sommer of Rantoul. Six grandchildren; Steve (Lana) Sample of Paxton, Sami Rueck of Paxton, Matt (Dana) Lazzell of Shelbyville, Angel (Chad) Hookland of Rantoul, Ashley Aranda of Rantoul and Nick Sommer of Rantoul and six great grandchildren, Jaelin, Brandon and Matthew Lazzell, Cody and Shelby Sample and Tyrian Hookland. He also leaves behind numerous cousins, nieces and nephews. Last but not least, his loyal companion, Coco a chocolate lab who was always by his side.
He was preceded in death by his parents.
Sam was a painter at the University of Illinois for thirty years, retiring in 1993 as supervisor. He was a member of the Mahomet Masonic Lodge #220 AF & AM, the Bloomington Scottish Rites, past president of the Cornbelt Shrine Club, the Foosland Sportsman's Club and the Fisher AMVETS. He enjoyed camping, bowling, softball and spending time with friends and family.
"To say he was a collector of "stuff" is an understatement. He always said his "stuff" would be our inheritance. I'd say it will take us years to go through all of it. You name it, he has it! From magazines, to baseball caps to Beanie Babies and everything in between. Tinkering with models and train sets brought him hours of joy. And the kids all loved going to the basement to play with Grandpa's "stuff".
He was very active in his community, helping his neighbors and friends when he was needed. Many Sundays were spent cooking breakfasts at Foosland Sportsman's Club, getting the whole family involved. He was famous for his pancakes the size of hubcaps.
Those who knew him well knew about his "little black cloud" that followed him around. You know - If it weren't for bad luck I'd have no luck at all - his theme song. We all got a kick out of it. My favorite was, when one of us was tired he would say "You don't know what tired is" or if we were sick "You don't know what sick is". He really thought he was funny....and I have to say, he really was. But, no more black clouds for him, we know he's sitting in a lawn chair outside a garage with his buddies gone before him having a cold one.
He will be truly and forever missed by those who love him.
In Lieu of flowers memorial tributes may be made to the Shriner's Crippled Children's Hospital, The American Cancer Society or to an Organization of the Donor's Choice.

To send flowers to the family or plant a tree in memory of Sammy Ray Sommer, please visit our floral store.

Please click here to view the video tribute
To send flowers to the family in memory of Sammy Sommer, please visit our flower store.