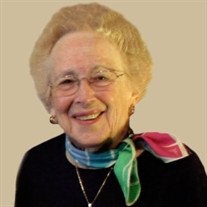 GIBSON CITY - Rosemary (Stubblefield) Schertz, 93, died at 2:01 a.m. on Tuesday (August 14, 2018) at Gibson Area Hospital after suffering a stroke. Visitation will be from 5-7 p.m. Friday at Rosenbaum Funeral Home in Gibson City. Funeral services will be in the same location at 11 a.m. Saturday, with the Rev. John Tennyson officiating. Following the service, burial will be in Elliott Cemetery. A lunch will follow at the Gibson City United Methodist Church.
Mrs. Schertz was born June 10, 1925, at the family's farm home near McLean, Ill. She was the third daughter of Ansel F. and Pearl (Nafziger) Stubblefield.
She was preceded in death by her parents; two sisters, Eunice Kelly and Barbara Rodgers; a brother, Ansel J. Stubblefield; and an infant brother, Joseph Stubblefield.
She married C. Richard Schertz on June 14, 1947, at the McLean Methodist Church. He died in 2013 at age 90. The couple had celebrated over 65 years of marriage and were close partners in family business and in life.
Mrs. Schertz is survived by her son, John Richard (Anna) Schertz, and her daughter, Jean (Phillip) Noellsch, who both lived near her on family farms east of Gibson City.
Other surviving family members include grandsons James (Christina) Noellsch of Wheaton, Ill. and David (Victoria) Noellsch of College Station, Tex. Her three great-grandchildren are Ethan Phillip Noellsch and Raegan Marie Noellsch of Wheaton, and Haddie Rosemary Noellsch of College Station.
She is also survived by nieces and nephews, including Judy (Roger) Augspurger of Normal.
Mrs. Schertz graduated from McLean Community High School in 1943. She then attended Illinois Wesleyan University in Bloomington, Ill. Of many college memories, her favorite by far was meeting a fellow student and future husband at a social mixer between her sorority, Kappa Kappa Gamma, and his fraternity, Sigma Chi. She was chosen as the Sweetheart of Sigma Chi in 1947, following the couple's engagement.
She graduated with a bachelor's degree in business in June 1947, just days before her wedding. She remained a loyal alumna and supporter of both the university and her sorority.
After college, she taught school, first at Stanford Grade School and then at Gibson City Grade School after the couple moved to Gibson City in 1950 and until their first child was born in 1951.
Throughout her life she was a homemaker but also enjoyed using her business training to handle the financial records for the couple's businesses.
Mrs. Schertz was an avid genealogist, and she amassed records for all branches of her family and her husband's family. Among her achievements was organizing publication an 800-page book of family history and genealogy for the 100th Stubblefield-Funk Reunion in 1984, titled A Tree Grows in Funks Grove.
She was a member of the Gibson City United Methodist Church, Gibson Area Hospital Auxiliary, Governor Thomas Ford Chapter of Daughters of the American Revolution, and the Ford County Historical Society. She was a key resource for local history, beginning with Gibson City's Centennial in 1971.
She joined in her husband's love of flying, and both were members of the Comanche Flyer Foundation of the International Comanche Society, a group of owners of that model of Piper Aircraft. They traveled in their own aircraft throughout the United States, Canada, and Mexico. She chronicled those trips with annotated travelogues and photos. She earned her private pilot's license in 1987 at age 62.
Mrs. Schertz was a modern woman who used early versions of computers and often communicated via email, especially during the couple's winter travels to Florida. However, she was also a traditional lady who preferred what she called "real mail" - the handwritten kind.
Her hobbies included reading books and multiple newspapers daily, cultivating her flower garden as she was able, and enjoying 60-plus continuous years of playing bridge monthly.
Her spirit and intelligence will be missed by her family, who all know a special person has left their midst.
Memorials may be made to Moyer District Library or Gibson Area Hospital Foundation, both in Gibson City.


To send flowers to the family or plant a tree in memory of Rosemary Schertz, please visit our floral store.

Please click here to view the video tribute
To send flowers to the family in memory of Rosemary Schertz, please visit our flower store.