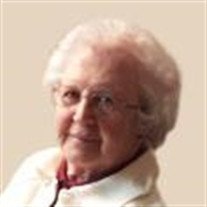 Rosella M. Jesse, 94, of Gibson City went to be with the Lord on Sunday, March 3, 2019, surrounded by her loving family at the Gibson Area Hospital-Annex. She was a devoted wife, mother, aunt, grandmother, great grandmother and great great grandmother.
Mrs. Jesse was born on September 18, 1924 in Niantic, IL, a daughter of Lynne and Bertha Green Roberts. She married Fred W. Jesse on October 10, 1942 in Lockport. They were married for 66 years, he passed away on February 18, 2008.
She is survived by two daughters, Marilyn (Francis) Stevenson and Barbara (George) Meyer both of Gibson City, seven grandchildren, many great grandchildren and great great grandchildren; and a daughter-in-law, Ruth Jesse of Bloomington.
She was preceded in death by two sons James (Jim) Jesse and Robert (Bob) Jesse; granddaughter Kimberly; two brothers Art and Myron and her parents.
Mrs. Jesse was a member of the First Christian Church of Gibson City, CWF and Friendly Circle Club. She enjoyed her family, sewing, baking, and shuffle boarding during the many winter months spent in Florida with her husband. Her family was her entire life and she was the epitome of unconditional love and grace to all who knew her.
Funeral services for Rosella Jesse will be held at 11:00 a.m. on Friday, March 8, 2019 at First Christian Church in Gibson City, The Rev. Ray Lantz officiating. Visitation will be held from 10:00-11:00 a.m. at the church. Burial will be in Drummer Township Cemetery.
In lieu of flowers, memorial contributions may be made to First Christian Church or Gibson Area Hospital-Annex.

To send flowers to the family or plant a tree in memory of Rosella M Jesse, please visit our floral store.

To send flowers to the family in memory of Rosella Jesse, please visit our flower store.