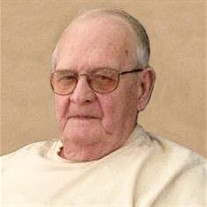 A Celebration of Life will be at 1:00 p.m. on Saturday, September 22, 2018 at Rosenbaum Funeral Home in Gibson City with Pastor Jim Davis of The Gibson City American Lutheran Church officiating. Family will receive friends one hour prior to his service at the funeral home.

Burial of Cremains will be in Drummer Township Cemetery in Gibson City following the service. Full Military Rites will be accorded by Lee Lowery American Legion Post 568. Memorials may be directed to Gibson City Rotary Club for the North Park Playground Project where his
great-grandchildren love to play.

Ron was born on June 15, 1931 in Ellsworth, Illinois, a son of Clem and Elsie Razor Kreitzer. He married Carol Greenlee on February 6, 1955 in Anchor, Illinois.

He was preceded in death by his parents and a brother, Donald.

Ron proudly served in the United States Army, a veteran of the Korean War. He later farmed with his father for many years in the Anchor area. He was employed at the Bank of Gibson for many years as a custodian, retiring in 2008.

He was known for his love of gardening and his beautiful flowers.


To send flowers to the family or plant a tree in memory of Ronald Dean Kreitzer, please visit our floral store.

Please click here to view the video tribute
To send flowers to the family in memory of Ronald Kreitzer, please visit our flower store.