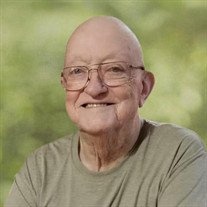 Ronald R. Harsha, 83, of Gibson City passed away at 9:42pm Wednesday April 1, 2020 at his home in Gibson City. A private family funeral service was held Saturday April 4, 2020 at the First Baptist Church in Gibson City with Pastor Dennis Norton officiating. Burial at Riverside Cemetery in Saybrook followed. Memorial contributions may be made to the First Baptist Church.
Ron was born November 24, 1936 in Bellflower the only son of Henry Ray and Mabel Stiger Harsha. He married Sue Ann Sosamon on July 23, 1998 in Foosland. She survives in Gibson City. Also surviving are his children Kevin Harsha of Bloomington, Brian (Terrie) Harsha of Foosland, Teressa (Terry) McRae of Gibson City and Michelle (Ryan) Zoller of Leesburg, Virginia. Eight grandchildren, nine great grandchildren and his three sisters Marjorie Baize of Towanda, Doris Wyant of Normal and Diane Harsha of Bloomington. He was preceded in death by a son Leland Pearson and a sister Jean Baker.
Ron proudly served in the United States Army and was a member of the VFW. He was a famer, a longtime mechanic and at one time a part time Champaign County deputy. Ron also was a long time member of the Foosland Methodist Church, Foosland Sportsmans Club, The Gibson City Masonic Lodge #733 AF & AM and the Cornbelt Shrine.

To send flowers to the family or plant a tree in memory of Ronald Harsha, please visit our floral store.

To send flowers to the family in memory of Ronald Harsha, please visit our flower store.