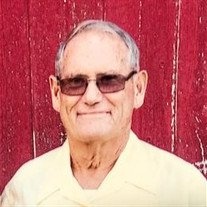 Ronald D. Conover, 76, of Gibson City passed away at 6:23 am Monday November 4, 2019 at OSF St. Francis Medical Center with his loving family at his side. Ron's Memorial Service will be held at 7:00pm Thursday November 7, 2019 at the St. Peter's Free Lutheran Church in Melvin with Pastor John Brennan officiating. A visitation will be held from 4:00-7:00 pm prior to the service at the church. Memorial contributions may be made to his church.

He was preceded in death by his parents, a brother Russell and a niece Adelle McCreary.

Ron was always working and liked to keep busy. He worked at M&W Gear Company and Big Wheels as a mechanic and later was part owner of Shaner implement. He was a carpenter and built houses. He was an over the road truck driver and for the past seventeen years was a driver for Don Hansen Farming. He enjoyed fishing and spending the winter months in Florida.

He was a kind man, loving husband, father, grandfather and brother. His smile will be missed by all who knew and loved him.

To send flowers to the family or plant a tree in memory of Ronald D Conover, please visit our floral store.

To send flowers to the family in memory of Ronald Conover, please visit our flower store.