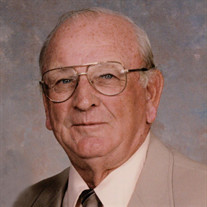 A Celebration of Life will be at 4:00 p.m. on Thursday, August 2, 2018 at Melvin United Methodist Church in Melvin with Pastor Liz Reis officiating. Full Military Honors will be accorded. Visitation will be from 1-4:00 p.m. prior to his service on Thursday. Rosenbaum Funeral Home in Gibson City is assisting the family with arrangements.

Inurnment will be at a later date in Melvin Cemetery in Melvin. In lieu of flowers, memorials may be directed to Gibson Area Hospital-Annex, Melvin Fire Department or Melvin United Methodist Church.

He was preceded in death by his parents; granddaughter, Tonya Boundy and brother, Robert Boundy.

Sonny proudly served in the United States Navy as a Pharmacist's Mate Second Class during WWII. In May 2017, he and his son Larry, participated in the Peoria Honor Flight. Sonny continued to tell everyone and share his experience.

He started farming in 1947 and was a life-long farmer in Melvin. He was a member of the Ford County Fair Board.

Sonny was a devoted family man and insisted his children were perfect. He was a people person, a jokester and never knew a stranger. He and his friends met on Tuesdays for ‘Coffee Club'.

Online condolences and memories of Sonny may be shared with the family at rosenbaumfh.com.

To send flowers to the family or plant a tree in memory of Ronald 'Sonny' G. Boundy, please visit our floral store.

To send flowers to the family in memory of Ronald Boundy, please visit our flower store.