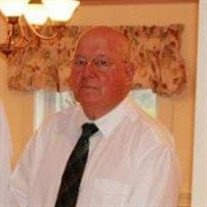 Roger Lee Meiss, 81, of Sibley passed away at 6:16 pm Thursday February 11, 2021 at Carle Foundation Hospital in Urbana. Private family services will be held at Rosenbaum Funeral Home in Gibson City. Burial will be in Mt. Hope Cemetery in Sibley. Memorial contributions may be made to St. John's Lutheran Church in Sibley where he was a long-time member.
Roger was born May 9, 1939 in Fairbury. A son of Daniel C. and Lucille Streib Meiss. He married Judy Ann Steidinger on November 2, 1958 in Fairbury. He is survived by his loving wife of sixty-two years Judy Meiss of Sibley. His daughter Cynthia (Howard) Simmons of Paxton, four grandchildren Zachary (Hannah) Meiss of Gibson City, Gregory (Brittany) Meiss of Sibley, Samantha (Kyle) Schultz of Sibley and Jonathan Meiss of Broken Arrow, Oklahoma. Also, nine great grandchildren and two brothers- Richard (Janet) Meiss of Sibley and Curtis (Janice) Meiss of Fairbury. He was preceded in death by a son Scott and his parents.
Roger was a 1957 graduate of Fairbury-Cropsey High School. He was a farmer and the owner of Meiss Feed and Supply of Sibley for over forty years. He enjoyed music and playing his guitar.

To send flowers to the family or plant a tree in memory of Roger Meiss, please visit our floral store.

To send flowers to the family in memory of Roger Meiss, please visit our flower store.