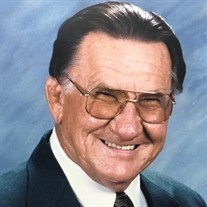 Robert C. "Bob" Hill, 87, of Gibson City, died at 10:06 a.m. Sunday, February 10, 2019 at the Heritage Health Nursing Home in Gibson City. His Celebration of Life Service will be held at 11:00 a.m. Saturday, February 23, 2019 at Rosenbaum Funeral Home, 925 North Route 47, Gibson City. The Rev. John Tennyson will be officiating. Visitation will be held 9:00 - 11:00 a.m. prior to the service. Memorial contributions may be made to the Gibson City United Methodist Church.
Bob was born December 31, 1931 in Perry County, Illinois, a son of Carl and Lucille Hill. He married Mary Jane Anderson on May 28, 1955 in Tamaroa.
Surviving are his wife of sixty-three years, Jane Hill, their children Diane Smith and Carla (Jim Allen) Jones of Normal; four grandchildren, Katie (David) Rice of Jacksonville, Florida; Lauren (Scott) Hill of Mobile, Alabama; Regan (Austin Larson) Smith of Austin, Texas; and Danielle (Zach Kirby) Jones of Elliott; two great-grandchildren, Tristen and Harper Hill; and a sister, Ella Mae Wilson of Tamaroa.
He was preceded in death by a daughter Peggy Hill and a brother Jack Hill.
After high school graduation, Bob served in the United States Navy for four years. He was stationed at Pearl Harbor in Hawaii, and served as a fireman and submarine mechanic. In 1956, he and Jane moved to Gibson City, where he took a job at Shaner Implement Co., starting out at the parts counter, then sales, and eventually became co-owner, first with Clifford Shaner and later with Ronald Conover until his retirement in 1995. During his retirement, he was a grounds keeper at Drummer Township Cemetery until the fall of 2017.
After becoming empty-nesters the couple would travel the country by motorcycle, Bob driving, and Jane in the sidecar beside him. Bob enjoyed attending farm toy shows with Jane, and he had a vast collection that they showed, shared and sold. They were members of the United Methodist Church, and the "Saturday Night Card Club", a group of friends that met for over 50 years. Bob and Jane attended many Gibson City Little League games every summer. He was a loving husband, a treasured father, a devoted grandpa, and will be missed by many friends and neighbors as well.

To send flowers to the family or plant a tree in memory of Robert HIll, please visit our floral store.

Please click here to view the video tribute
To send flowers to the family in memory of Robert HIll, please visit our flower store.