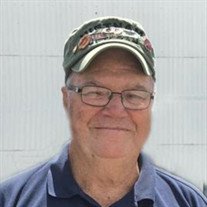 Robert L. "Bob" Farris, 75, of Gibson City peacefully passed away Thursday July 9, 2020 at his home. A Masonic service will be held at 2:30 pm Monday July 13, 2020 at Rosenbaum Funeral Home in Gibson City, visitation will follow until 5:00 pm. His funeral service will begin at 5:00 pm with Pastor Gary Fairchild officiating. Military rites will follow the service at the funeral home. A private family burial will take place at Drummer Township Cemetery. Memorial contributions may be made to The Gibson City VFW or to the family.
Bob was born May 25, 1945 in Anneta, Kentucky a son of Glen and Margie Decker Farris. He married Joyce L. Hackney on November 21, 1970 in Ogden. They were married forty-nine years. Joyce survives in Gibson City. Also surviving are their children Cindy (Daniel) Morano of Gibson City, Rob (DeeAnna) Farris of Ludlow and Chris (Kevin) Farris of Gibson City. Seven grandchildren Dylan Morano, Adam Farris, Bryant Morano, Allison (Dylan) Roberts, Skyler Morano, Emma Roberts and Angelina Parisi. A great granddaughter Aria Giddens and two great grandsons Andrew and Jordan Dunn. His siblings - Glenn (Brenda) Farris of Payson, Roger (Karen) Farris of Camargo, Ella (Gary) Fairchild of Gibson City, Edna (Larry) Taylor of Broadlands, Gloria (Jim) Lowdermilk of Rocky Mount, North Carolina. Sister in law Brenda Farris of Fairgrange and former son in law Curt Roberts of Gibson City and many nieces and nephews. He was preceded in death by his parents, brother James and infant sister Barbara.
Bob proudly served in the United States Army in the 7th Infantry, 101st Airborne during the Vietnam War. He was a member of the VFW Post #6289 of Gibson City and was the current Post commander, he was also a member of the Lee Lowery American Legion Post #568 and its color guard unit as well as 40 / 8. Bob was a mason and a member of Gibson City Lodge #733 A.F. & A.M. He was Millwright at Central Soya for thirty years. While at Central Soya he was Workers Union BCTGM Local #323 president and served on the McMillen Credit Union Board. After retiring he went to work at Heritage FS and as a driver for Bradbury Auto Sales.
Bob enjoyed fishing, antique cars and spending time with his family. He will be greatly missed by all that knew and loved him.
On line condolences and memories of Bob can be shared with the family at www.rosenbaumfh.com

To send flowers to the family or plant a tree in memory of Robert Farris, please visit our floral store.

To send flowers to the family in memory of Robert Farris, please visit our flower store.