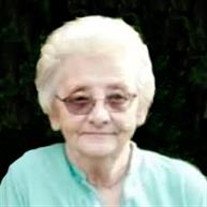 Patricia E. "Pat" Brucker, 77, of Gibson City passed away at 12:31 am Saturday September 28, 2019 at her home in Gibson City. A private family burial will be held according to Pat's wishes.

She was preceded in death by her parents and a son-in-law Jim Tabaka.

Pat enjoyed bowling, doing crafts, playing Bingo and baking. Over the years she was a waitress at many Gibson City restaurants, most recently at Country Kettle. Pat was a devoted wife, mother, grandmother, great grandmother, sister and friend. She will be missed by all that knew and loved her.

Memorial contributions in Pat's memory can be made to the St. Jude's Children's' Research Hospital

To send flowers to the family or plant a tree in memory of Patricia E. Brucker, please visit our floral store.

To send flowers to the family in memory of Patricia Brucker, please visit our flower store.