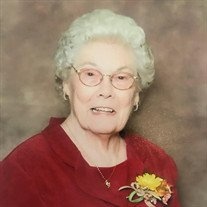 Norma Lois Patterson, 93, of Gibson City left this world to return to her heavenly home at 3:50 pm Friday June 5, 2020. A private family funeral will be held at the Gibson City United Methodist Church with Pastor John Tennyson officiating. Burial will be in Secor Cemetery in Secor, Illinois. Memorial contributions may be made to the Gibson City United Methodist Church, Cunningham Children's Home, McLean County Humane Society or to The ElPaso VFW.

Mrs. Patterson was born November 14, 1926 at the old Brokaw Hospital in Normal, Illinois to Arnold H. and Genevieve Hinshaw Campbell. She married Lloyd F. Patterson on March 3, 1946 in ElPaso, Illinois. He passed away October 1, 1999.

Norma graduated from ElPaso Township High School in 1944. She earned a Bachelor of Science in Education Degree in 1958 from Illinois State Normal University and a Master of Education Degree in 1968 from the University of Illinois. She taught elementary school for thirty years in Illinois and California. Following retirement, Lloyd and Norma moved to ElPaso, Illinois and then to Gibson City, Illinois. She is a member of the United Methodist Church of Gibson City where she taught an adult Sunday School class and belonged to several groups in the church including the Weseleyana Circle which she was a life-long member. She also belonged to the Gibson City Women's Club, the Retired Teachers Association of Ford County and the Woodford County Historical Association and the Thomas Ford Chapter of The Daughters of the American Revolution.

Norma and her husband enjoyed traveling by automobile, airplane, ships, and pulling and RV with their truck. They have traveled all fifty states of the United States. They have been to Europe twice as well as Canada and Mexico. They also enjoyed a Caribbean Cruise and an Inside Passage Cruise along the coast of Alaska. Norma's favorite thing was spending time with her family, reading fiction and non-fiction books and taking care of her cats. She also has a collection of sculptured cats as well as other items collected from her travels.

To send flowers to the family or plant a tree in memory of Norma Lois Patterson, please visit our floral store.

Please click here to view the video tribute
To send flowers to the family in memory of Norma Patterson, please visit our flower store.