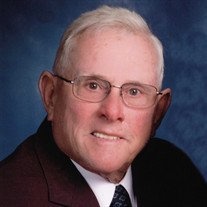 Michael A. Freehill, 79, of Gibson City passed away at 1:10am Saturday October 19, 2019 at Carle Foundation Hospital in Urbana after a brief illness surrounded by his family. His Funeral Mass will be held 10:00 am Friday October 25, 2019 at Our Lady of Lourdes Catholic Church in Gibson City with Father Dong Van Bui officiating. Burial with military honors will be at the Melvin Cemetery. A rosary service will be held at 3:30 pm Thursday October 24, 2019 followed by visitation until 7:00 pm at Rosenbaum Funeral Home in Gibson City. Memorial contributions may be made to Our Lady of Lourdes Catholic Church (534 N. Wood St.) or to Gibson Area Hospital (1120 N. Melvin St.).

Mike was born July 8, 1940 in Bloomington a son of Claude P. and Marjorie F. Bergan Freehill. He married Joyce E. Swearingen at Our Lady of Lourdes Catholic Church in Gibson City on February 2, 1963; they were married for fifty-six years. Joyce survives in Gibson City. Also surviving are their children Janice (Luke) Johnson of Kirkland, Washington; Jim (Jennifer) Freehill of Melvin and Ken Freehill of Gibson City. Three grandchildren, whom he adored are, Ben, Jessica and Amanda Freehill. Three brothers- Tom (Barbara) Freehill of Saline, Michigan; Al (Jane) Freehill of Chenoa; and Dale Freehill of Fort Lauderdale, Florida. His sister- Anne (John) Zick of Hinsdale,and sister-in-laws Doris Freehill and Gail (Lynn) Anliker of Gibson City. Many nieces and nephews survive. In addition to his parents, Mr. Freehill was preceded in death by his daughter, Katherine (1989) and brother, Chuck (2015).

Mike was a farmer in the Melvin and Gibson City area all of his life. He attended St. Joseph's College in Rensselaer, Indiana. Mike was an active and longtime member of St. George's Parish in Melvin, Our Lady of Lourdes Catholic Church and was a 4th Degree Knight of The Knights of Columbus. Mike served six years in the Army National Guard, seeing active duty in the 1968 Chicago riots and was a member of the Lee Lowery American Legion. He served 11 years (1974-1985) as treasurer for the Melvin-Sibley School Board and eight years (1985-1993) as land commissioner for the Melvin-Sibley School District.

Mike's gentle nature and warm smile will be forever remembered as will his commitment to faith, family, friends and farming.

To send flowers to the family or plant a tree in memory of Michael A. Freehill, please visit our floral store.

To send flowers to the family in memory of Michael Freehill, please visit our flower store.