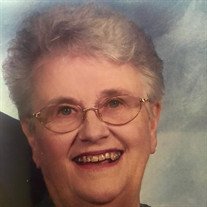 Mary Jane Hill, 86, of Gibson City passed away Tuesday January 21, 2020 at Heritage Health Nursing Home in Gibson City. A private family burial will be held at a later date. Rosenbaum Funeral Home in Gibson City is assisting the family with arrangements.
Mary Jane was born March 2, 1933 in DuQuoin, a daughter of Kyle and Helen Brown Anderson. She married Robert C. "Bob" Hill on May 28, 1955 in Tamaroa. They were married for sixty-three years. He passed away February 10, 2019.
She is survived by two daughters- Diane Smith of Saucier, MS and Carla (Jim) Allen of Normal. Four granddaughters- Katie (David) Rice of Jacksonville, Fl; Lauren (Scott) Hill of Saucier, MS; Regan Smith of Austin, TX and Danielle (Zach) Kirby of Elliott. She was a great grandmother to Tristen, Harper and Judah Hill of Saucier, MS. A brother- Thomas (Beverly) Anderson of Carmel, IN also survives. She was preceded in death by a daughter Peggy Hill in 2008.
Mary Jane graduated from SIU Carbondale and was a teacher. After getting married she stayed home to raise her children. When the girls were older, she worked at Shaner Implement and also worked alongside her husband at Farm Toy Shows for many years. She enjoyed babysitting her grandchildren and attending their school events and ballgames. She was a member of the First United Methodist Church of Gibson City. She delivered Meals on Wheels with her husband Bob for several years. They enjoyed travelling and attending youth league baseball games every summer. She was a member of the Gadabouts Club and she and Bob were members of the Saturday Night Card Club with their friends for over fifty years.
Memorial tributes may be made to the First United Methodist Church of Gibson City.

To send flowers to the family or plant a tree in memory of Mary Jane Hill, please visit our floral store.

To send flowers to the family in memory of Mary Hill, please visit our flower store.