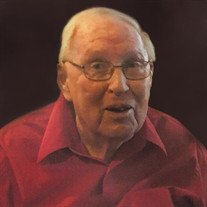 Martin Leroy Meyer, 92 passed away at 10:20 am, Tuesday, December 1, 2020 at the Gibson Area hospital - Annex in Gibson City, Illinois. He was born on March 27, 1928 in Sibley, Illinois a son of Martin H. and Rose (Martens) Meyer. Martin grew up in Ford County and graduated from Drummer Township High School. Martin married Irene (Johnson) Shambrook on July 30, 1966 in Gibson City they have been married fifty-four years. He spent his life farming and working a number of shoulder-season jobs before retiring to Fairbury in 2007.
Martin was preceded in death by his parents and his older sisters, Elaine Sixt, Phyllis Lewis, and Lois Meyer. He is survived by his wife, Irene of Gibson City. Five children Kathy (George) Wineland, Jean (Rick) Krueger, Don (Diane) Meyer, Randy (Leanne) Meyer, and Lee (Tina) Meyer. He was very proud to be "PawPaw" or "PaPa" to many beloved grandchildren and great-grandchildren, making each feel special in their own way. He was also well-known for being grandfatherly to everyone he met.
Martin is remembered by his family for many reasons. He had numerous interests, including: motorcycle riding and touring, traveling and camping, and participating in bowling league, and playing a mean game of mini-golf or "putt-putt" as he called it. He was an active member of the American Lutheran Church of Gibson City and St. Paul's Lutheran Church of Roberts. Martin attended the Indianapolis 500 for many years, with generations of family members watching the race beside him on the bleachers. For the love of his grandchildren, Martin changed his allegiance from the Cubs to the Cardinals, favoring good company over old loyalties. Martin and Irene hosted holiday gatherings and summer picnics for decades, keeping family connected over the miles.
Martin is lovingly remembered for his care of and devotion to the youngest members of his family. He drove around the fields with grandchildren on his lap, "tinkered" with vehicles and toys to keep them running for the young ones, shared his weakness for vanilla soft-serve, and encouraged us to spoil the farm's dogs and cats. In his later years, when not able to provide fun on the farm, he still gave generously of his time and attention.
Private services were held on Saturday, December 5th at Rosenbaum Funeral Home in Gibson City with burial at Lyman Township Cemetery, due to Covid concerns. A memorial service will be held in the future, to pay tribute to his love and life. In lieu of flowers, memorial donations may be made to St. Paul's Lutheran Church in Roberts or to Habitat for Humanity.

To send flowers to the family or plant a tree in memory of Martin Meyer, please visit our floral store.

To send flowers to the family in memory of Martin Meyer, please visit our flower store.