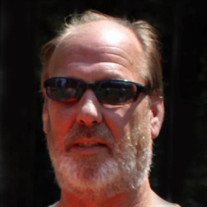 Mark F. Beck, 63, of Elliott peacefully passed away Sunday October 4, 2020 at his home in Elliott. His graveside service will be held at 11:00 am Saturday October 24, 2020 at Elliott Cemetery in Elliott, IL. Pastor Jim Davis will be officiating. Memorial contributions can be made to an organization of the donor's choice.
Mark was born February 1, 1957 in Gibson City, a son of Marvin G. and Anna Marie Brownlee Beck. He is survived by his father Marvin Beck of Elliott, sister Julie (Randy) Nettleton of Lincoln, Alabama and brother Al (Amelie') Beck of Orange City, Iowa. Also, two nieces and two nephews Stacey (Craig) Cutting, Bloomington IL, Eric (Melissa) Nettleton, Peachtree City GA, Justin (Jen) Nettleton, San Diego CA and Taylor (Christopher) Espinosa, Orange City Iowa and several great nieces and nephews. He was preceded in death by his mother.
Mark was a 1975 graduate of Gibson City High School. He worked as an engineer for the railroad for many years. He most recently worked for Champaign-Danville Grain as a grain inspector. He was a Chicago Bears and Cubs fan and enjoyed all types of auto racing.

To send flowers to the family or plant a tree in memory of Mark Beck, please visit our floral store.

To send flowers to the family in memory of Mark Beck, please visit our flower store.