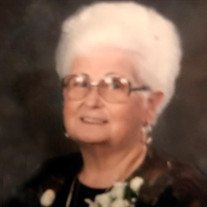 Marjorie was born on September 16, 1926 in Bloomington, IL, a daughter of John Gray and Louise Schleeter Canute. She married Ernest L. Vetter on April 8, 1944 in Decatur. Ernest and Marjorie were married for 69 years, he preceded her in death on October 16, 2013.

Marjorie was a member of the Sibley United Methodist Church where she was a Sunday school teacher, a board member and the Methodist Women group. She worked along side her husband in the grain and livestock business.

A private celebration of life service will be held at Rosenbaum Funeral Home in Gibson City. Memorials may be made to Fairview Haven Nursing Home, ALS or The Alzheimer's Association.

To send flowers to the family or plant a tree in memory of Marjorie Jean Vetter, please visit our floral store.

To send flowers to the family in memory of Marjorie Vetter, please visit our flower store.