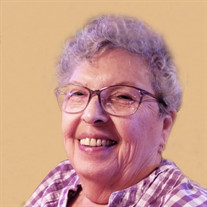 Gibson City - Margaret Alberta Gambill, 84, of Gibson City, passed away at 6:53 p.m. on Monday, January 28, 2019 at Gibson Area Hospital-Annex.
A Celebration of Margaret's Life will be held at 11:00 a.m. on Saturday, February 2, 2019 at First Christian Church in Gibson City. In lieu of flowers, memorial tributes may be made to her church. Rosenbaum Funeral Home in Gibson City is assisting the family with arrangements.
Margaret was born on August 9, 1934 in Clarion Township, Illinois, a daughter of Robert Irving and Bernard Bernice Underwood DeLong. She married James David Gambill on August 14, 1954 in LaMoile, Illinois. They were married for forty-five years. He died on October 4, 1999.
Margaret is survived by her two daughters, Nancy (John) Westfall of Gibson City and Lois (David) Malehorn of Pittsburgh, PA; four grandchildren, Rachel (Ania Hidalgo) Malehorn, Sharon (Thomas) Johnson, Michelle (Jose) Sosa and Alison (Billy) Gu; four great grandchildren, Booker, Miles, Miliana and Luna; two brothers, John DeLong and Dan DeLong both of Wisconsin.
She was preceded in death by a brother Thomas.
Margaret was a fourth grade teacher. She taught in Peoria before moving to the Mattoon area and teaching in the Mattoon Public Schools for many years, retiring in 1995.
She moved to Gibson City in 2001 where she became an active member of the First Christian Church, singing in the choir and participating in many Bible Study groups. She was a member of the Retired Teachers Association. She also enjoyed being a tutor for students in the GCMS school district.
Margaret was a loving wife, mother, grandmother, great grand mother, sister and friend and will be greatly missed.

To send flowers to the family or plant a tree in memory of Margaret Alberta Gambill, please visit our floral store.

To send flowers to the family in memory of Margaret Gambill, please visit our flower store.