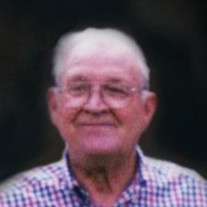 Loyd H. Sloat, peacefully passed away at his home in Fisher on August 10, 2020 at the age of 96. His loving family had the privilege and honor of caring for him in his last days. A private family graveside will be held at Willowbrook Cemetery in Fisher. Pastor Glenn Hart will officiate and Military Honors will be accorded by the Fisher Amvets Post 52. Memorial contributions may be made to St. Jude's Children's Hospital in St. Louis.

Loyd was born July 31, 1924 in Fisher. A son of Gardner and Agnes Buck Sloat. He married Violet Mae Lowery on April 25, 1948 in Gibson City, they were married for almost fifty years. She passed away November 8, 1997. He married Anna Sue Spencer on April 25, 2003 in Okeechobee, Florida; she survives.

He was preceded in death by six brothers and one sister.

Loyd entered the military service in 1943. He was a Corporal in the United States Army and was proud to serve his country during World War II. He was a union carpenter and all-around handyman. He retired from the University of Illinois at an early age to enjoy hunting, fishing, camping, boating, and restoring antique cars. Loyd and Violet chose to raise their family in Fisher where he was a resident for over sixty years.

To send flowers to the family or plant a tree in memory of Loyd Sloat, please visit our floral store.

To send flowers to the family in memory of Loyd Sloat, please visit our flower store.