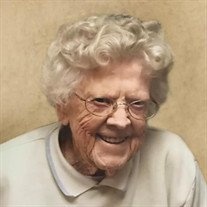 Georgia Louise Swearingen, 96, of Gibson City passed away at 12:30pm Monday March 30, 2020 at the Gibson Area Hospital Annex in Gibson City. A private family burial will be held at Drummer Township Cemetery in Gibson City. A Celebration of Life Service will be held at a later date at Rosenbaum Funeral Home in Gibson City. Memorial contributions may be made to The Champaign County Humane Society or to an Organization of the Donor's Choice.
Louise was born April 28, 1923 in Arrowsmith a daughter of Alva and Grace Vinson Monical. She married John W. Swearingen on December 12, 1940 in Gibson City. He passed away on August 16, 2013. She is survived by a son John Robert (Wanda) Swearingen of Elliott. Granddaughter- Paula (Jack Huppert) Swearingen of Elliott and a sister Shirley Franklin of Farmer City. She was preceded in death by six brothers Wayne, James, Howard, Walter, Floyd and Lloyd, and a sister Dorothy.
Louise was a member and past president (1993-1994) of the Illinois Association for Home and Community Education. She was also a member and past president (1991-1993) of The Illinois Homemakers Extension Association. She was an avid reader and took great pride in her Handwork making many quilts, doilies and afghans.

To send flowers to the family or plant a tree in memory of Louise Swearingen, please visit our floral store.

To send flowers to the family in memory of Louise Swearingen, please visit our flower store.