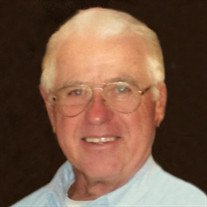 Gibson City - Loran A. Harris, 75, of Gibson City died at 3:23 a.m. on Friday, April 19, 2019 at McLean County Nursing Home in Normal surrounded by his loving family.
Loran was born on February 12, 1944 in Bloomington, a son of Otis and Marie (Blake) Harris. He married Mary Ann Maubach on April 23, 1966 in Ft. Knox, Kentucky. She survives in Gibson City.
Also surviving are his children, Kelly Harris of Elliott and Karla (Jesse) Southern of Saybrook; a grandson Kaleb Southern and two sisters, Sharon Fowler and Mary (John) Kerz, both of Bloomington.
He was preceded in death by his parents and a sister Bernadine Lundstrom.
Loran was a mechanic for Illinois Central Railroad for over 27 years. He proudly served in the United States Army.
He was a member of I & I Tractor Club and the Two Cylinder John Deere Tractor Club.
Memorial contributions may be made to an organization of the Donor's Choice.
A visitation will be held from 5:00-6:30 p.m. on Friday May 3, 2019 at Rosenbaum Funeral Home in Gibson City. A private burial will be held at a later date.

To send flowers to the family or plant a tree in memory of Loran A. Harris, please visit our floral store.

Please click here to view the video tribute
To send flowers to the family in memory of Loran Harris, please visit our flower store.