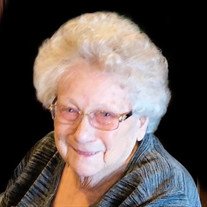 Gibson City - Lila L. Parsons, 86, of Gibson City formerly of Thawville died at 6:10 am Thursday November 15, 2018 at OSF Heart of Mary Medical Center in Urbana. Her funeral service will be held at 1:00 pm Tuesday November 20, 2018 at Rosenbaum Funeral Home in Gibson City. Visitation will be held 11:00 am - 1:00 pm prior to the service. Burial will be at a later date.

Mrs. Parsons was a cook at the Wooden Fork in Waldron, Indiana. She owned and operated Lila's Café in Roberts and many will remember her most for being a cook for many years at the Gibson City Elementary School. She was a member of the First Christian Church in Gibson City, the Moose Club, the Roadrunner Camping Club and was very active with the Gibson Area Hospital Auxiliary as well as serving as a board member for the Ford County Housing Authority.

Memorial tributes may be made to the Gibson City Food Pantry

On line condolences can be made at www.rosenbaumfh.com

To send flowers to the family or plant a tree in memory of Lila L. Parsons, please visit our floral store.

To send flowers to the family in memory of Lila Parsons, please visit our flower store.