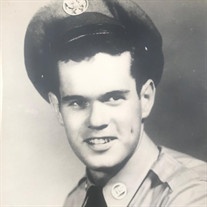 Leo Michael Chapman Sr., 87, of Fisher, loving husband, father, brother, grandfather and great grandfather, went to be with his lord and savior on Wednesday December 2, 2020 surrounded by his loving and dedicated family.

Mr. Chapman was born September 17, 1933 in Dubuque, Iowa, to the late Merlin Michael and Valerie Anastasia (Murphy) Chapman. Leo served his country for fifteen years in the United States Air Force as a helicopter and aircraft mechanic. He served in Viet Nam and was awarded the Distinguished Flying Cross and the Air Medal for meritorious actions while participating in rescue operations. After his service, he worked for the United Postal Service in Champaign as a postal carrier and then mechanic for twenty-five years.
Mr. Chapman was a member of Knights of Columbus. He enjoyed working on old cars, working in the yard, spending time with family and friends, and traveling with his wife.

Memorials can be made in Leo Chapman's name to Our Lady of the Lords Church, Gibson City; Carle Hospice; Daily Bread Soup Kitchen, Champaign or a charity of your choice.
Private family services will be held at a later date.

To send flowers to the family or plant a tree in memory of Leo Chapman, please visit our floral store.

To send flowers to the family in memory of Leo Chapman, please visit our flower store.