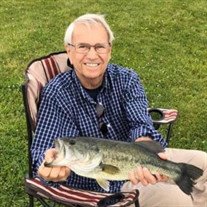 Larry K. "Butch" Johnson, 73, of Gibson City formerly of Foosland peacefully passed away at 11:24 am Wednesday October 28, 2020 at Carle Foundation Hospital in Urbana. A private family graveside service will be held at Mt. Hope Cemetery in Foosland. Rosenbaum Funeral Home in Gibson City is assisting the family with the arrangements. Memorial contributions may be made to the donor's favorite local Veteran Association.

Larry was born June 11, 1947 in Urbana, a son of Keith Johnson and Ruby Sampson Johnson. He married Diana Nickrent in 1967. He later married Betty Nelson Randolph in 1986. Betty preceded him in death on March 6, 2005.

He is survived by three children Michelle (Ron) Goin of Gibson City, Steven (Sarah) Johnson of Normal and Rebecca (Kevin) Yanders of Rockledge, Florida. Six wonderful grandchildren-Westin and Jacey Goin, Katelyn and Keith Johnson, and Evan and Ethan Yanders, and four siblings Jim Johnson, who preceded him in death, Nancy (Randy) Coile, Donna Evans and Mike (Vicki) Verkler. He was preceded in death by his parents Keith Johnson, Ruby and Paul Verkler.

Butch was a proud United States Marine Veteran serving in the Vietnam War. He worked for Central Soya, as a sheet metal worker, and as a project manager in the HVAC industry for many years. He enjoyed fishing, rooting for the Chicago Cubs and Chicago Bears, and watching western movies especially John Wayne. He was always up for a good game of Euchre. He was very proud of his hometown Foosland and would often get together with the ‘Foosland Gang'.

To send flowers to the family or plant a tree in memory of Larry Johnson, please visit our floral store.

To send flowers to the family in memory of Larry Johnson, please visit our flower store.