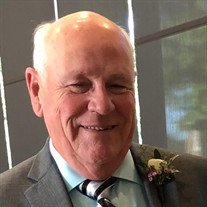 Kenneth Earl Sprau, 76, of Gibson City died at 1:05 am Friday, January 4, 2019 at Carle Foundation Hospital in Urbana. Ken's wishes were to be cremated and no services held.

Ken was born September 14, 1942 in Bloomington, Illinois, son of Henry Earl and Wilma Charlene Taylor Sprau. He married Linda Anne Allen on October 21, 1962 in Monticello, Illinois and she survives. Also, surviving are his two children- Bradley and (Samantha), Julie and (Tom); three grandchildren- Lucas, Taylor and (Ty), and BriAnna; and sister Linda Lee (Allen) Nash. He was preceded in death by his sister- Sandra Mae Kelch.

Ken graduated from Bellflower High School in 1960. He attended Western Illinois University and graduated from Elkhart University of Technique in Elkhart, Indiana as a medical technologist. He retired as Director of the Laboratory at Gibson Area Hospital upon completion of 46 years of service.

In his younger years, Ken played fastpitch softball for local teams. He was also an avid St. Louis Cardinals fan and a western and Civil War history buff. Later in life, Kenneth thoroughly enjoyed spending time in Colorado riding his horse Chisum and hiking in the mountains. Most of all, his children and grandchildren were the highlight of his life, and he took great pride in attending all of their sporting events. Kenneth was also a member of St. Peter's Free Lutheran Church of Melvin.

Memorial contributions may be made to St. Peter's Free Lutheran Church of Melvin or to Gibson Area Hospital Laboratory Department.

To send flowers to the family or plant a tree in memory of Kenneth Sprau, please visit our floral store.

To send flowers to the family in memory of Kenneth Sprau, please visit our flower store.