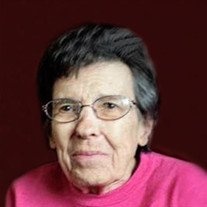 June Allene Leonard, 88, of Gibson City passed away at 9:05 pm Thursday August 29, 2019 at The Heritage Manor Nursing Home in Gibson City surrounded by her loving and devoted family.
Her Celebration of Life service will be held 11:00 am Thursday September 12, 2019 at The American Evangelical Lutheran Church in Gibson City with Pastor Jim Davis officiating.
June was born January 23, 1931 in Gibson City. A daughter of Louis F. Leora V. Berkler Thompson. She married Evan R. Leonard on March 25, 1960 in Corinth, Mississippi. They were married for fifty-five years. He died July 9, 2015.
Surviving June are her children- Sherri (Gary) Davis of Sibley, Ken Leonard of Fisher and Jana (Karissa) Leonard of Gibson City. Granddaughter- Rendi O'Neal of Elliott, great grandchildren - Justin (Nicole) O'Neal of Mahomet, Kayla O'Neal of Fisher and four great great grandchildren- Jessi O'Neal, Rebekah O'Neal, Emily and Landen Vaughn. A niece Tami Shaffer and two nephews - Wayne Brokate and Bill Brokate. She was preceded in death by a sister- Jeanette Brokate.
June is a 1949 graduate of Drummer Township High School. June worked at the First National Bank in Gibson City, Allied Gas Company, Tucker's Gibson Material, Gibson Motel and the Elliott Post office. She was a very active member of the American Evangelical Lutheran Church. She loved being with her family and especially enjoyed spoiling her grandchildren and great grandchildren.
June was involved with the horses and farm life, she enjoyed going to the horse shows and being in the IPHA with her husband; and also raised and bred terrier dogs in the area for many years. She enjoyed old time movies and the original horror movies from long ago and enjoyed reading a good western book.
The family would like to give a heartfelt Thank you to the Heritage Manor Nursing Home staff for the care they gave June during her stay and to us the family during our time of need. Also, a thank you to Carle Hospice and the wonderful nurse Wendy for the care given during the time at the end, all of you have hearts of Gold.
In lieu of flowers memorial contributions may be made to The American Evangelical Lutheran Church or to the Alzheimer's Association.

To send flowers to the family or plant a tree in memory of June A. Leonard, please visit our floral store.

To send flowers to the family in memory of June Leonard, please visit our flower store.