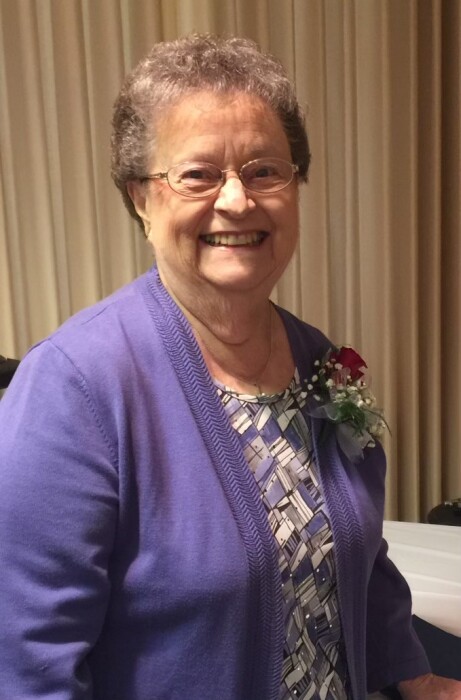 Joyce (Hildenbrand) Uebele went to meet her Lord on Wednesday, March 24, 2021 in Anderson, Indiana.  She was born March 5, 1936 in Watseka, Illinois a daughter of Milford and Edith (Curphey) Hildenbrand.  She grew up on a farm in Thawville, Illinois, attending Thawville, and Roberts-Thawville Schools, and graduated Valedictorian of her class.  She graduated from the University of Illinois with a bachelor’s degree in Music Education and started her teaching career in 1958.  She went on to teach K-12 music, voice lessons, and Madrigals in Roberts-Thawville, Ford Central, Melvin-Sibley, Tri-Point, and P-B-L Schools until her retirement in 1995.  She led her RT Choruses to First Place Sweepstakes many times.  She also led the Y.O.U.R.S. Group for many years.  She sang for numerous weddings and funerals, as well as directed and participated in church and community choirs.  One of her greatest accomplishments was sharing her knowledge and love of music with countless students and community members.  She also volunteered at St. Vincent Anderson Women’s Center for over 15 years, as well as Liberty Christian School.

She was preceded in death by her parents, 2 brothers, Marvin, and Charles (Bernice) Hildenbrand, and 1 sister, Marlene (George) Kuester.

In addition to her musical contributions, her greatest joy was her 4 grandchildren.  She never missed a soccer game, music concert, or activity in which they were involved.

The family would like to express deep appreciation for the care provided to Joyce over the last 3 years at Primrose in Anderson, Indiana.

Memorials may be made to St. Paul’s Lutheran Church in Roberts, Illinois, or First United Methodist Church in Anderson, Indiana.

To send flowers to the family or plant a tree in memory of Joyce Uebele, please visit our floral store.

A Memorial Tree was planted for Joyce

Join in honoring their life - plant a memorial tree

To send flowers to the family in memory of Joyce Uebele, please visit our flower store.