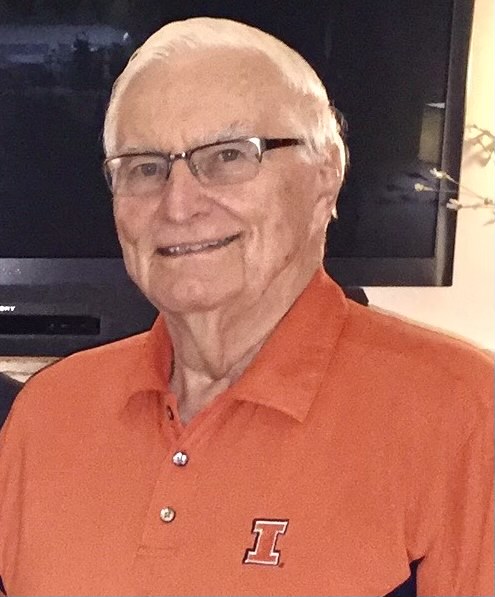 John A. “Jack” Johnson, 87, of Gibson City peacefully passed away surrounded by his loving family at 8:50 pm Friday May 21, 2021 at OSF St. Josephs Medical Center in Bloomington. Funeral services will be held 12:00 noon Thursday May 27, 2021 at Rosenbaum Funeral Home in Gibson City. Visitation will be held 10:00am – 12:00pm prior to the service. Burial with military honors will be held in Bellflower Township Cemetery. Memorial contributions may be made to the GCMS Booster Club in honor of his hard work, dedication and love for the GCMS athletics over the years.

He was preceded in death by his parents, sister Patricia Miller, brother Richard “Dick” Johnson and step son Brad Brandon.

Jack was an Army Veteran. He was a Captain for the Illinois State Police District 21, retiring in 1985. Jack was given the honor of Gibson City’s Citizen of the Year in 2001. He enjoyed golfing, Illini and Chicago sports and was a great supporter of Kevin Weaver racing. He helped countless people along his journey through life and will be missed by all that knew and loved him.

To send flowers to the family or plant a tree in memory of John A. "Jack" Johnson, please visit our floral store.

To send flowers to the family in memory of John Johnson, please visit our flower store.