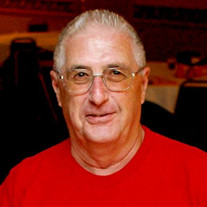 John was born July 14, 1939 in Bloomington. A son of John L. and Lucille Henson Anderson Sr. He married Barbara Joanne Preston on November 21, 1958 in Concord, California. They have been married for sixty-two years. She survives in Arrowsmith. Also surviving are two daughters - Tracy (David) Misch of LeRoy and Leslie (Roger) Bradford of Sibley. Six grandchildren Ryan Misch, Codi Tallon, Heather (Brad) Brucker, Dylan Misch, Cyndi (Ben) Wurmnest and Jake Bradford and four precious great grandsons Aydan, Colton, Tanner and Mason. A brother- Richard Henson of Maryland and a sister Ginger (Art) Deavers of Danvers. He was preceded in death by a sister Vichy.

John was a United States Navy Veteran. He was a commercial carpenter for many years and spent many years at the Clinton power plant. John was the type of guy that could fix anything! He enjoyed hunting and fishing with his grandchildren and he was excited about the upcoming birth of his first great granddaughter in a few weeks. He was also the kind of guy that never met a stranger! He was easy to talk to and always quick to offer help to others. He was loved by so many and could start up a conversation with anyone. He will be greatly missed by all that knew and loved him.

To send flowers to the family or plant a tree in memory of John Anderson, please visit our floral store.

To send flowers to the family in memory of John Anderson, please visit our flower store.