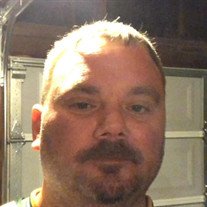 Jessie J. Forde, 45, of Gibson City formerly of Wisconsin, peacefully passed away Friday morning at his home in Gibson City. A Celebration of Life will
be held at a later date. Memorial contributions may be made to the family.

Jessie was born August 18, 1975 in Minneapolis, Minnesota. A son of Daniel Colbath and Gayle Forde. He married Christina Shover on March 1, 2019 in Paxton.
He is survived by the love of his life Christina and their precious child Jaymison. Also, a daughter Hope Forde of Superior, Wisconsin and her children
Tyray, Raelynn and Za'marria. His mother Gayle Forde of Minnesota as well as two brothers Shane Colbath and Brady Colbath of Minnesota
and a sister Kaysiann Forde of Idaho along with five nephews and six nieces. He was preceded in death by his father and grandparents.

Jessie was a machine operator and supervisor at Hearthside in Gibson City. He enjoyed playing on line games, medieval times and the Green Bay Packers.
He found the most enjoyment by being with his family and friends. He will be missed by all that knew and loved him.

To send flowers to the family or plant a tree in memory of Jessie Forde, please visit our floral store.

To send flowers to the family in memory of Jessie Forde, please visit our flower store.