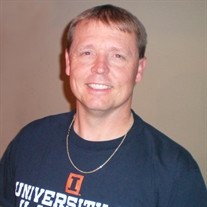 Jeff was born November 2, 1965 in Gibson City, a son of Doug and Carolyn Bradbury Finis. He spent his life growing up in Bellflower, IL. He married Teresa Dillman, his high school sweetheart on April 28, 1984 in St. Joseph. She survives in Cape Coral. Also surviving is a daughter Brianna (Wayne) Fortner of Cape Coral, granddaughter Madi who affectionately called him Papaw, his parents Doug and Carolyn Finis of Bellflower, brother Tim (Diana) Finis of Paxton and sister Cindy (Mitch) Risinger of Leroy. Also surviving are his wife's family whom he considered a part of him and all his nieces and nephews - he was close to all! Family meant everything to him.

He was preceded in death by a daughter Lynnae.

Jeff graduated from Bellfower Township High School in 1983. He started his working career right out of high school at Pittsburgh International Steel in Fairbury, IL. Later he moved to Caradco in Rantoul until he was given the opportunity to own and operate Finis Distributing where he worked and grew his bread distributorship for over 23 years and left when he was no longer able to work.
Outside of his family, Jeff enjoyed fishing with his dad, boating and basketball! He coached girls middle school basketball for 14 years at St. Joseph Middle School then moved to St. Joseph-Ogden High School where he was varsity coach for the girls for 4 years until his illness required him to leave.
Jeff believed in community and was an active part of the St. Joseph Community. He donated to fundraisers, was a member of the St. Joseph Church of Christ for many years and was a youth leader during that time. He coached girls' softball for 7+ years, and Y-ball for his daughters! He was also very active in the Gifford Lions Club where he volunteered as much as he could and enjoyed spending time with a great group of men - not to mention the great dinners he got!
Jeff left an impact on everyone he met! He was about friendship, family and loyalty. One of the most honest men around. He never gave up and fought to the end! He will be greatly missed, always remembered, and forever loved.

To send flowers to the family or plant a tree in memory of Jeffery Finis, please visit our floral store.

Please click here to view the video tribute
To send flowers to the family in memory of Jeffery Finis, please visit our flower store.