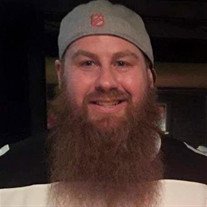 His funeral service will be at 10:30 a.m. on Friday, September 28, 2018 at Dewey Community Church in Dewey, with Rev. Neil Hauser officiating. Masonic service will be at 4:00 p.m. on Thursday at Rosenbaum Funeral Home in Gibson City with visitation following from 4:30-8:00 p.m.

Burial will be in East Bend Memorial Gardens. Memorials may be directed to the Cornbelt Shrine.

Jay was born on September 15, 1982 in Urbana, Illinois, a son to Marion Gerald ‘Jerry' and Barbara Elizabeth Kelly Caviness.

He was preceded in death by his parents.

Jay graduated from Fisher High School, Class of 2001. He was co-owner of Sammer's II in Gibson City.

He was an avid Blackhawks, Bears, Cardinals and Michigan fan. Jay was a member of Gibson City Masonic Lodge AF and AM #733 and the Mohammad Shrine and the Cornbelt Shrine.

Jay was an all around good guy with a great smile and infectious laugh and never met a stranger. Toews, his English Bulldog will be waiting for him at the Rainbow Bridge.

To send flowers to the family or plant a tree in memory of Jay T. Caviness, please visit our floral store.

Please click here to view the video tribute
To send flowers to the family in memory of Jay Caviness, please visit our flower store.