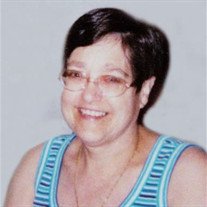 Janet Kay Busick, 64, of Guthrie died at 5:55 pm Sunday May 19, 2019 at The Heritage Health Nursing Home in Gibson City. A Celebration of Life Service will be held 1:00 pm Friday July 26, 2019 at Rosenbaum Funeral Home in Gibson City. Burial will follow at Drummer Township Cemetery in Gibson City. A visitation will be held for one hour prior to the service.
Janet was born May 28, 1954 in Gibson City, a daughter of Emerson and Donna Rutledge Busick.
Janet graduated from Melvin-Sibley High School. She attended Illinois State University for two years then graduated from Parkland College with two Associates' Degrees. She worked at State Farm Insurance Company in Bloomington for over twenty years. She loved animals. Over the years she raised, trained and showed horses and Keeshond dogs and raised Sugar gliders.
Janet is survived by her sister Cheryl Busick of Elgin and her brother Stephen (Cindy) Busick of Mahomet. Four nieces and nephews Kim (Jason) Walter of Tipton, Iowa; Marcia (Mike) Czerniak of South Elgin; Lee (Sara) Busick of Midway, Kentucky and Jenna Busick of Mahomet. Also, seven great nieces Kayla, Mackenzie, Alicia and Jenae Walter and Lexi, Ashley and Amber Czerniak.

Memorial tributes may be made to Hospice Hearts, P.O. Box 91 Thomasboro IL, 61878

To send flowers to the family or plant a tree in memory of Janet Kay Busick, please visit our floral store.

Please click here to view the video tribute
To send flowers to the family in memory of Janet Busick, please visit our flower store.