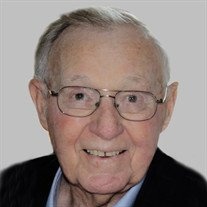 Jim McClard, 83 of Gibson City passed away Monday, July 15, 2019 in his home where he had received loving care from his family. Visitation will be Thursday, July 18th from 5:00 - 8:00 PM at Rosenbaum Funeral Home in Gibson City. A celebration of life service will be held at First Christian Church in Gibson City on Friday, July 19th at 11:00 AM with Pastor Mat Bowen officiating.
Jim was born February 12, 1936 in Arthur, IL to his loving parents Barton and Gladys McClard. He is survived by his high school sweetheart and the love of his life, Sue Day who he married on July 26th, 1958. He is also survived by two sons Mike (Michelle) and Pat (Mindy), four granddaughters, Camryn, Alia, Molly and Arabella and his sister June Bock. Jim was preceded in death by his parents, brothers Durward and Bill and a sister, Joyce Haws.
After a two year stint in the Army, Jim experienced a call to Christian ministry and served as student pastor to churches in Missouri and Kentucky while going to college and a year of seminary. Although he later turned his service toward education, he continued to use his gift of ministry speaking as a lay person and as a leader of the church.
Jim was a charter member of the Illinois Principal's Association and served in various leadership roles over the years including president in 1982-1983, but his true passion was the students and teachers. He was a principal in Gibson City for 23 years. He started out in and loved working with middle school aged youth. Later on when the Gibson City schools consolidated, he had the opportunity to work with the elementary school and this brought a new set of experiences with the little ones and their high pitched voices and generosity of hugs. Jim was a mentor to generations of teachers and administrators in Gibson City and has received more than one note saying he was 'the best principal I ever had'.
After retiring in 1995, Jim continued his support of the local schools in various interim positions and as coach of both the Girls and Boys golf teams. And then there was Jim's life outside of the schools. He dearly loved playing golf with his friends and was thrilled when his oldest granddaughter chose to play golf in high school. He was an avid historian, especially of the American Civil War and gave talks on the subject to local groups. He and Sue also had more time for traveling, taking driving trips all over the U.S. His greatest joy was in spending time with his family and in the church. Memorials in his name may be sent to First Christian Church or to the Gibson Area Hospital Building Fund.

To send flowers to the family or plant a tree in memory of James D. McClard, please visit our floral store.

Please click here to view the video tribute
To send flowers to the family in memory of James McClard, please visit our flower store.