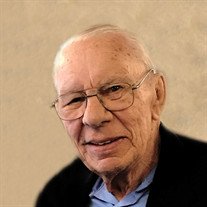 James S. Jensen, 85, of Monticello formerly of Gibson City died at 6:04 a.m. Wednesday April 24, 2019 at the Maple Point Assisted Living Facility in Monticello.
A memorial visitation will be held 5:00 pm - 7:00 pm Thursday May 23, 2019 at Rosenbaum Funeral Home in Gibson City.
Mr. Jensen was born December 27, 1933 in Gibson City, a son of Harry and Beulah Hansen Jensen. He married Kay Shields in August 1958 in Foosland. He later married Darlene Tucker in March of 1976 in Gibson City she survives in Monticello. Also surviving are his children- Randy (Kathy) Keith of Monticello, Julie (Charlie) Turner of Gibson City and Tina Leffler of Fairbury. Six grandchildren, twelve great grandchildren and three great great grandchildren and his sister Shirley Dean of Gibson City.
He was preceded in death by his grandson Doug, two brothers and one sister.
Mr. Jensen proudly served in the United States Navy. He was chief engineer at Gibson Community Hospital for many years and then worked at Jarman Memorial Hospital in Tuscola as their chief engineer until his retirement.
Working on tractors and lawnmowers was a favorite pastime of Jim's. He was always solving everyone's mechanical issues never asking for anything in return. He loved his yard and kept it perfect. He was a die hard Green Bay Packer fan, Illini and NASCAR fan.
Memorial tributes may be made to Maple Point Assisted Living or Gibson Area Hospital

To send flowers to the family or plant a tree in memory of James Jensen, please visit our floral store.

Please click here to view the video tribute
To send flowers to the family in memory of James Jensen, please visit our flower store.