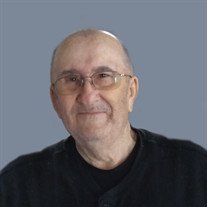 James Michael "Mike" Butler, 77, of Gibson City passed away at 3:30 pm Sunday January 19, 2020 at Carle Foundation Hospital in Urbana with his loving family at his side. His Celebration of Life Gathering will be held 6:00-8:00 pm Thursday January 23, 2020 at the Kruse Center in Gibson City. Memorial contributions may be made to The Swann Special Care Center in Champaign or to the Mike Butler Family.
Mike was born December 3, 1942 in Saybrook, Illinois the only child to Charles Franklin Butler and Shirley Means Butler. He married Sharon Williams on December 19, 1992 in Gibson City. They were married for twenty-seven years.
Mike is survived by his wife Sharon Butler of Gibson City. His children - Dawn (Rodney) Shaffer of Union, Kentucky; Brian (Cindy) Butler of Killen, Alabama; Bruce (Tina) Butler of Gibson City and Bradley Butler of Champaign. Two stepsons- David (Joni) Williams of Felton, Tennessee and Tom Williams of Fisher. Sixteen grandchildren and eight great grandchildren, and his sister-in-law Donna Jo McCoy of Gibson City. He was preceded in death by his parents.
Mike farmed in the Saybrook area until 1981. He then was a truck driver for JM Jones / Super Valu retiring after eighteen years of service. He was a collector of toy tractors and had a great love for antique tractors and tractor shows as well as old TV shows. He loved his family and held a special place in his heart for his niece and nephew Megan and A.J. McCoy.
The family would like to thank the staff at Carle Hospital for the great care and compassion given to Mike.


To send flowers to the family or plant a tree in memory of James Michael Butler, please visit our floral store.

To send flowers to the family in memory of James Butler, please visit our flower store.