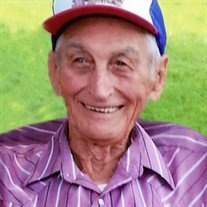 James H. ‘Jim' Brucker, 90, of Gibson City, passed away at 11:48 p.m. on Thursday, August 1, 2019 at his home.
His funeral service will be at 10:00 a.m. on Wednesday, August 7, 2019 at Rosenbaum Funeral Home in Gibson City with Pastor Jim Davis officiating. Visitation will be from 5-7:00p.m. on Tuesday at the funeral home.
Burial will be in Mt. Hope Cemetery in Sibley. Memorials may be directed to American Cancer Society or Gibson Area Hospital.
Jim was born on March 24, 1929 in Fairbury, Illinois, a son of Henry and Lena Meyer Brucker. He married Flossie Mae Brown on March 4, 1951 in Gibson City. She preceded him in death on April 7, 2003.
Surviving are two sons, Marland (Joann) Brucker of Mahomet and Mark (Molly) Brucker of Elliott; seven grandchildren, Shawn Arnold, Jennifer (Vic) Bradshaw, Jodi Hott, Justin Brucker, Brad (Heather) Brucker, Nick (Katie) Brucker and Jesse Brucker; six great grandchildren; and special companion, Dorothy Sosamon of Gibson City.
He was preceded in death by two sons, James, Jr. and Eric; and one daughter, Teresa.
Jim was a farmer and truck driver for many years, most recently, Buhs Trucking in Gibson City.
He was a member of Gibson City Lions Club and Jim loved going to Sprint car races.
Jim never met a stranger, he loved spending time with his family and friends.

To send flowers to the family or plant a tree in memory of James H. Brucker, please visit our floral store.

Please click here to view the video tribute
To send flowers to the family in memory of James Brucker, please visit our flower store.