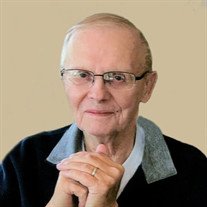 Jack W. Royal, 84, of Gibson City, passed away at 7:44 p.m. on Monday, March 25, 2019 surrounded by his family at his residence.
A Celebration of Life will be at 4:00 p.m. on Sunday, March 31, 2019 at Gibson City United Methodist Church with Rev. John Tennyson officiating. A Masonic service will be at 1:00 p.m. followed by visitation until 4:00 p.m. at the church.
Inurnment will be in Drummer Township Cemetery in Gibson City with full military honors. Memorials may be directed to United Methodist Church Organ Fund or Shriners Children's Hospital or a charity of the donor's choice.
Jack was born on August 11, 1934, a son to Walter J. and Marguerite Slaughter Royal. He married Marlene Milligan on December 6, 1958 at Melvin Methodist Church.
Surviving is his loving wife of 60 years, Marlene Royal of Gibson City; children, Steve (Kim) Royal of Ogden, Denise (Jerry) Sanders of Loda and Chris (Gloria) Royal of Hebron, KY; six grandchildren, Nick (Montana) Royal, Kasey and Kyle Sanders and Victoria, Kevin and Michael Royal; two great grandchildren, Rinley and Hickson Royal.
He was preceded in death by his parents; a brother, Robert Royal and sister, Carole Rhodes.
Jack was a U.S. postal carrier in Gibson City from 1956-1994 and a famer for over 50 years, retiring in 2010. He proudly served in the United States Army/Air Force during the Korean War.
He was a lifelong member of Gibson City United Methodist Church, Gibson City Masonic Lodge #733 A.F. & A.M. and the Gibson City School Board.
Jack was a loving husband, father, grandfather, great grandfather and brother. He was treasured by his family and will be greatly missed.

To send flowers to the family or plant a tree in memory of Jack W. Royal, please visit our floral store.

To send flowers to the family in memory of Jack Royal, please visit our flower store.