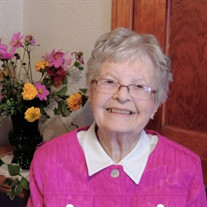 Irene Marie Schneck,100, of Gibson City passed away peacefully Sunday October 27, 2019 at The Gibson Area Hospital-Annex.
A Celebration of Marie's life will be held at 12:00pm Thursday October 31, 2019 at the Gibson City United Methodist Church with Pastor John Tennyson officiating. Family will receive family and friends in the fellowship hall following the service at the church.
Per family's request and wishes Memorial tributes can be written to Marie Schneck /Susan Kean. Write India memorial on memo line. This will be used to build a second floor on the parsonage of a Methodist Church in Vellore, India. This room will be used as a Sunday School room on the weekend and to house family members of poor patients at the nearby hospital that need a place to stay.
Marie Phillips Schneck was the second of three children of Frank and Mabel Chatterton Phillips. She was born on August 10, 1919 on a farm near Olin, Iowa. As one who loved to read, she flourished in her one room school house. She attended college at Northern Iowa Teachers College and then taught elementary school. When she married her insurance salesman, Alfred (Al) Schneck, little did she know they would become missionaries in South India for 21 years. There she raised three daughters Elaine (Gordon) Zubrod of Pennsylvania; Kathy (Claude) Martin of Florida; and Susan (Bill) Kean of Gibson City, Illinois. She overcame numerous challenges, including having to send her children to a boarding school hundreds of miles away, suffering through extreme temperatures, having thyroid fever, feeding and entertaining hundreds of visitors each year, even ones she had never met before, and being separated from extended family for five years at a time. When asked what was the best thing about serving in India, she said it was seeing people come to know Jesus.
Upon returning from India in 1970, Al (and Marie) served as pastor in several Methodist churches throughout Iowa until their retirement and subsequent move to Gibson City.
Throughout her life, Marie modeled unconditional love and sacrifice to all who knew her. She consistently was kind and encouraging and would ask thoughtful questions that showed her care and interest. She was gentle and intelligent, and her words were always accompanied by deeds. For example, she kept homemade cinnamon bread in her freezer ready to thank anyone for an act of kindness. She would arrive at church very early to make sure she could greet as many people as possible. When pastoring at Alta, Iowa, Al and Marie helped to sponsor a Laotian family of refugees who became like family to them. For many years, Marie enjoyed calling on shut ins and friends in the nursing homes in Gibson City and often would join them in their weekly activities.
Marie had a deep faith that kept her through the good and difficult times. She prayed for loved ones and those on the prayer list at church daily. In fact, even at age 100 while residing in the Annex nursing home, her children and grandchildren regularly asked for her prayers.
She will Surely be missed by her three children, seven grandchildren, eighteen great grandchildren and one great great grandchild, brother Earl and sister Ethel; but we are greatly rejoicing at the wonderful party taking place in Heaven at her arrival. Local grandchildren are Justin Kean, Matt Kean and Kristin Salyards.


To send flowers to the family or plant a tree in memory of Irene Marie Schneck, please visit our floral store.

To send flowers to the family in memory of Irene Schneck, please visit our flower store.