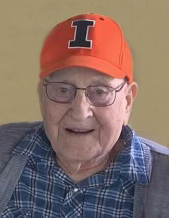 Howard D. Nettleton, 97, peacefully passed away at 1:45 am Monday September 13, 2021 at the Gibson Area Hospital-Annex. Visitation will be held 10:00am-11:00am Thursday September 16, 2021 at Rosenbaum Funeral Home in Gibson City. Funeral services will follow at 11:00 am with Pastor Gary Fairchild officiating. Burial with military rites will take place at Drummer Township Cemetery. Memorial contributions may be made to The Gibson Area Hospital or to the Gibson City United Methodist Church.

Howard was born July 4, 1924 in Nicollet, Minnesota a son of Clarence and Elizabeth Clark Nettleton. He married Mary Jo Hillard on March 8, 1952 in Towanda, Illinois. She passed away on June 13, 2020. They had been married sixty-eight years. Surviving are three sons Gary (Michele) Nettleton of Saybrook, John (Valarie) Nettleton of Lincoln, Alabama and Randy (Julie) Nettleton of Lincoln, Alabama. Fourteen grandchildren, thirty great grandchildren and one great great grandchild. He was preceded in death by his parents, a son James Benny Nettleton, brother Lawrence and two sisters Maxine Behrens and Elva Flesher.

Howard graduated from Towanda High School in 1943. He served in the United States Air Force from 1945-1947. Howard lived and farmed in rural Saybrook for forty-seven years. He and Jo moved to Gibson City in 1999. He was a member of the Gibson Area Hospital Board of Directors for twelve years; and member of the John Deere two-cylinder club for many years and enjoyed restoring many two-cylinder John Deere tractors.

To send flowers to the family or plant a tree in memory of Howard D. Nettleton, please visit our floral store.

To send flowers to the family in memory of Howard Nettleton, please visit our flower store.