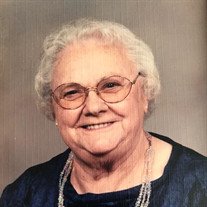 Geraldine M. "Gerry" Kietzman, 97, of Gibson City and Melvin died at 7:05am Friday February 1, 2019 at the Accolade Healthcare Center of Paxton. Her funeral service will be held at 11:00 am Friday, February 8, 2019 at Rosenbaum Funeral Home, 925 North Route 47 in Gibson City with Pastor Deb Domeier officiating. Burial will be in the Melvin Cemetery. Visitation will be held for one hour prior to the service. Memorial contributions may be made to the Gibson Area Hospital Scholarship Foundation or to Moyer District Library.
Gerry was born December 22, 1921 in Piper City the third child of nine, to Robert P. and Anna Branz Hornickel. She married Robert O. Kietzman on January 26, 1946 in Chatsworth, he died May 4, 1987. Surviving are two daughters- Virginia "Ginger" Kietzman of Paxton and Jayne (Kenneth) Sinn of Melvin; four grandchildren Emily (Chris) Allen of Lenexa, Kansas; Molly Sinn of Buckley, Jenny (Josh) Foley of Senoia, Georgia and Jeffrey (Jessi) Sinn of ElPaso. Eight great grandchildren and three step great grandchildren. Two sister-in-law's- Vivian Hornickel of Gilman and Judy Hornickel of LaSalle also many nieces and nephews. She was preceded in death by four brothers and four sisters.
Gerry graduated from Chatsworth High School in 1938 she then went on to Paris School of Nursing in Paris, Illinois and graduated in 1942. She was a registered nurse at area hospitals and nursing homes. She also helped her husband farm. She was a member of St. Peter's Lutheran Church in Melvin and The Roberts American Legion Auxiliary. She loved to crochet, read and was a great fan of the Chicago Cubs.


To send flowers to the family or plant a tree in memory of Geraldine "Gerry" Kietzman, please visit our floral store.

To send flowers to the family in memory of Geraldine Kietzman, please visit our flower store.