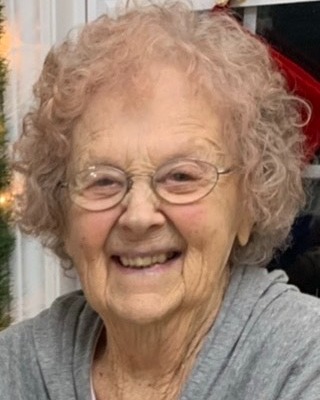 Norma Geraldine (Jeri) (Kuntz) Bidner was born on June 18, 1921 in Hensley Township to Russell and Viola (Fillenwarth) Kuntz. She was baptized on August 28, 1921, and confirmed at Immanuel Lutheran Church of Osman on her 23rd birthday, June 18, 1944. She left her earthly home on November 12, 2022 surrounded by family members.

She attended Kimler School, a one-room schoolhouse near Bellflower, riding her favorite pony, Snowball, to school most days. She went on to graduate from Bellflower Township High School. She would often remark that her favorite memories of High School were going to dances with friends, but she must have found some time for studying because she scored so high on a test given to all McClean County students that she earned a 4 year scholarship to any state college in Illinois. After High School, she worked as a secretary for Caterpillar in Southern Illinois, and then at Chanute Air Force Base during WWII.

She married Owen Bidner on April 6, 1944. Instead of cashing in that scholarship, she worked very hard as a farm wife, and raising their seven children. She had an enormous garden she grew every year, and she canned countless amounts of vegetables to feed her large family over the winter. In her later years she enjoyed showing those vegetables and flower arrangements at the Fisher Fair. She was always so proud when she would win the Grand Champion ribbon for her vegetable basket arrangements. She spent time teaching sewing to a 4-H club, many years as an Election Judge, and going door-to-door for cancer fund drives. During the early 1960’s she served on the committee to pass a school referendum that led to the building of Fisher High School in 1964.

One of her most important jobs she held was as a Sunday School and Bible School teacher for 63 years at Osman Immanuel Lutheran. Jeri loved that time she spent with the nursery school children teaching them about the love of Jesus through stories, songs, and fingerplays.

Jeri was also most proud of her homestead and her red barn which dates back to 1869 . She was blessed with good enough health to live at that farm past her 100th birthday. She spent the last year of her life in the loving care of her daughter, Cheryl, in Mahomet.

While she has left this life behind, her memories and legacy will live on forever. Her family members won’t be able to play a game of Uno without fond memories of her and her competitive spirit.

To send flowers to the family in memory of Geraldine "Jeri" Bidner, please visit our flower store.