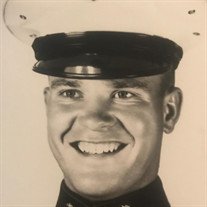 Gerald L. Tompkins, 86, of Gibson City passed away at 2:47 pm Wednesday April 29, 2020 at Carle Foundation Hospital in Urbana. A private family graveside service will be held at Drummer Township Cemetery in Gibson City with Pastor Jim Davis officiating. Memorial contributions may be made to the American Evangelical Lutheran Church of Gibson City or to St. Jude's Children's Hospital.


He was preceded in death by his parents and a brother Bill.


Mr. Tompkins was a member of the American Evangelical Lutheran Church and was a lifelong farmer. He worked for State Farm Insurance as a Crop Hail Adjuster for twenty-five years, was on the Gibson City Fire Department for twenty-five years and also was a Drummer Township trustee for many years. He was a loyal Green Bay Packers Fan and a Proud United States Marine Veteran serving his country 1953-1955. He also was a dedicated fan of any GCMS sports that his grandchildren were involved in and held a special place for the GCMS boys' basketball team. Gerald was a kind hearted man who loved to talk to people and had an infectious smile.

To send flowers to the family or plant a tree in memory of Gerald Tompkins, please visit our floral store.

To send flowers to the family in memory of Gerald Tompkins, please visit our flower store.