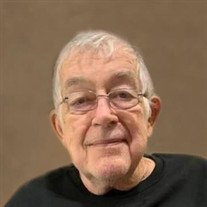 George D. Holzhauer, 84, of Champaign peacefully passed away Tuesday February 23, 2021 at his daughter's home in Gibson City surrounded by his loving family. A visitation will be held Saturday February 27, 2021 from 2:00-3:00 pm at the New Beginnings Christian Church in Gibson City, followed by a funeral service at 3:00 pm. Pastor Nick Carlson will officiate. Memorial contributions may be made to the Champaign County Humane Society. Rosenbaum Funeral Home in Gibson City is assisting the family with their services.
George was born September 9, 1936 in Pontiac, Illinois. A son of George and Ruth Allen Holzhauer. He married Rosalie McDade in November of 1959. Surviving George is his loving wife of sixty-one years Rosalie Holzhauer of Champaign. Three daughters- Sheila Mayberry of Mahomet, Julie (Mike) Taylor of Gibson City and Tina (Bruce) Holzhauer-Butler of Gibson City. Ten precious grandchildren and twenty-four great grandchildren. Two sisters- Carol Lindor of Pontiac and Marsha Friant of Pontiac. He was preceded in death by a son Thomas and a great great grandson.
George was a medic in the Army. He was a meat cutter for the IGA stores in the area for many years. He then worked for Ramshaw Smith maintaining their apartment complexes. He retired after twenty years of service. He enjoyed camping and loved collecting coins and had a vast collection of beer steins. George found the greatest joy in "pittleing" finding treasures and restoring them too new. He will be missed by all that knew and loved him.

To send flowers to the family or plant a tree in memory of George Holzhauer, please visit our floral store.

To send flowers to the family in memory of George Holzhauer, please visit our flower store.