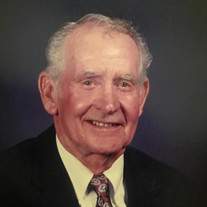 Gene Bradd
Harold E. "Gene" Bradd, 94, of Cooksville, peacefully passed away at 10:40 am Sunday December 6, 2020 surrounded by his loving family at his home in Cooksville. A graveside service will be held at 1:00 pm Thursday December 10, 2020 at Drummer Township Cemetery in Gibson City. Memorial contributions may be made to the St. Jude's Children's Hospital, The Shriners Children's Hospital or to the Ellsworth United Methodist Church.

Gene was born January 4, 1926 at the family home in rural Gibson City a son of Clifford R. and Gladys Colvin Bradd. He married Cleo J. Steffen on February 23, 1957 in Peoria they have been married for sixty-three years. Cleo survives in Cooksville. Also surviving are two sons- Michael (Treva) Bradd of Mattoon and Randall (Jacyln) Bradd of Normal. Three grandchildren Kyle (Erin) Bradd of Park Ridge, Kourtney Bradd of Champaign and Kaitlyn (Richard) Thompson of Champaign, two great grandchildren - Andy and Lauren Bradd. Three brothers Robert (Kathy) Bradd of Clinton, Ernest (Barbara) Bradd of Vinton, Virginia and Marvin (Carole) Bradd of Mansfield as well as many nieces and nephews.
He was preceded in death by his parents, and two brothers Glenn Bradd and Earl Bradd.

Gene gradated from Drummer Township High School in 1943. He farmed in the Gibson City and Mansfield area before moving to Cooksville in 1964. Gene loved farming and it was not only his livelihood it was his passion. In 1979 he and his family established Bradd Farms Inc. with farming interests in Illinois and Missouri. Gene managed this business until just before his death. He received his private pilots license in 1956 and enjoyed flying his Cessna for many years. He attended the Indianapolis 500 race for over sixty years. He introduced his sons and grandchildren to the Indy 500 and some still attend today. In recent years Gene became a fan of NASCAR and has always been a Chicago Bears fan. He will be missed by all that knew and loved him.

To send flowers to the family or plant a tree in memory of Gene Bradd, please visit our floral store.

To send flowers to the family in memory of Gene Bradd, please visit our flower store.